A Will To Change ~ Chapter 1

I lifted my head from the pillow, feeling like I had been run over by a freight train. Clearly, this was my body's way of telling me that I was getting too old to be partying this way, but I was going to ignore it for as long as I could. I knew better than anyone that you only live once so you may as well make it memorable. Once my eyes focused, I realized I was in Delia's bed, the woman I had sworn myself away from. But, after my eighth shot of Jack and one too many beers, I guess I had thrown all sense of reasoning out the window. I would have much rather been waking up next to that cute little waitress who had been flirting with me all night.

I sat up, grabbed my pants from the floor and pulled them up. I reached inside the pocket for my phone to check the time and found a text from my sister-in-law.

Oh, fuck. I totally forgot. Now I would just have to pay double to have flowers delivered to her today.
“Hey, where are you going?” Delia asked as she sat up on her elbow. Black smudges were swirled around her eyes like a raccoon.

“I gotta get. I have some things to do before my shift starts,” I said, bending down to tie my shoe.

“Liar. You’re off for the next three days.”

Was I? Damn, this bitch knew my schedule better than I did.

“Yeah, well, I got lots to do today. It’s my mom’s birthday.” She didn’t need to know that my mother was lucky to even get a phone call from me, and that was if I still remembered after I slept it off.
“Well, am I going to see you tonight?”

She stuck out her bottom lip and pretended to pout. Normally that would work on me, but not anymore.
“Oh, come on, Will. Albert is only going to be in Florida until Friday. Let’s make the most of it.”

Albert was Delia's much older husband; as in, he was seventy-two and she was thirty. He liked having a young, hot wife on his arm for all of his social functions, and she liked his bank account. She had everything that she wanted…a posh penthouse on the upper east side, a beautiful set of tits, diamonds strung around her neck, shoes that probably cost more than I made in a month. All paid for by said bank account. The only thing she was missing was a guy in her bedroom that was closer to her age, and that's where I came in.
At first, I was happy to accommodate her needs, but now it was just starting to get old. The sex was good enough and she certainly wasn’t afraid to try new things. But she was starting to become needy, almost as if she wanted some type of commitment from me. That’s where I drew the line. I was commitment phobic and wasn't ashamed to admit it. I could never imagine myself with one woman for the rest of my life. The mere thought of the same piece of ass forever depressed me. It was like settling for one type of liquor when there was a whole bar full to be sampled. Not to mention that I had to live up to my parent's very low expectations of me.

“Sorry, Delia, not tonight. We need to take this down a notch.” I stood up and buttoned up my pants.
She sat up quickly and got out of bed, wrapping the sheet around herself.

“What the hell are you talking about?” she asked, as she frantically followed me out of the bedroom.

“Delia, you’re a great girl and I like you, I really do, but it’s just getting old now. You’re married and –.”

“Oh no! Don’t you dare play that card, you son of a bitch! You couldn’t give two shits about that when I was sucking your dick last night.”

“Sweetheart, I was so drunk last night that a fuckin’ Sports Illustrated swimsuit model could have been sucking my dick and I wouldn’t have remembered. But I’m sure you were great, just like always.”

“I can’t believe you’re doing this.”

“Doing what? What did you think? That you and I were in some type of monogamous relationship or something? You’re married and I don’t tie myself down to one girl. These are things that we both knew going in. So why are you going all psycho on me now?”

I couldn’t control my laughter. “I used you? How the fuck did I use you? You’re the one that needed someone to be a fill-in for your decrepit husband that can’t get it up, and I was just happy to provide those services. So, in a way, you used me. Just have Albert buy you some new diamond earrings when he gets back, pop a few Viagra’s in his orange juice, and everything will be just fine.”

She lunged toward me and pushed me as hard as she could, not even budging me, causing the sheet to come off of her in the process. “You’re a fuckin’ asshole!” she shouted.

I looked over her naked body one last time. I had to admit, I was going to miss those tits and that perfect ass. “Better to be a fuckin’ asshole than an asshole gettin’ fucked.”

Her jaw dropped and her eyes narrowed. I gave her a quick grin before making my exit, just as I heard her heave what sounded like a very heavy object at the closed door, which I’m sure was intended for my head. While I stood in the hallway and waited for the elevator, I pulled out my phone and texted my sister-in-law back.

Hope, did I ever tell you that you’re my favorite sister-in-law?

Her reply came through just as I stepped into the elevator and hit the L button.

I’m your only sister-in-law.What’s your credit card number and how much do you want to spend?

I pulled out my credit card and punched the numbers into my phone. “Happy birthday, Mom,” I said, leaning my head on the elevator wall. When I stepped out and into the lobby, I instinctively reached for my sunglasses on top of my head, only to find that they weren’t there. Somehow, I didn’t think that the bright August sunlight streaming through the window and my throbbing head would mesh too well. After last night, I couldn’t even imagine where they were. I was surprised that I actually still had my wallet on me. Oh, well. Another pair bites the dust. Too bad they had to be my favorite two hundred dollar pair of Oakley’s.
I squinted as I stepped outside. It felt like it was a hundred degrees already and it was only a little after seven.

“Hey, Mr. McAdams. Are you putting out any fires today?” Jeffrey, the doorman for Delia’s apartment building, asked.

“No, but I think I may have started one on the top floor.” I smirked.

He shook his head and smirked back. I could tell that he was doing his best to hold back his laughter. I was pretty sure that he was up to speed on all the dirt of the tenants in the building. “Have a good one, Jeffrey,” I said as I hailed down a cab with nothing else on my mind except my own bed and being passed out cold in it within the next twenty minutes. 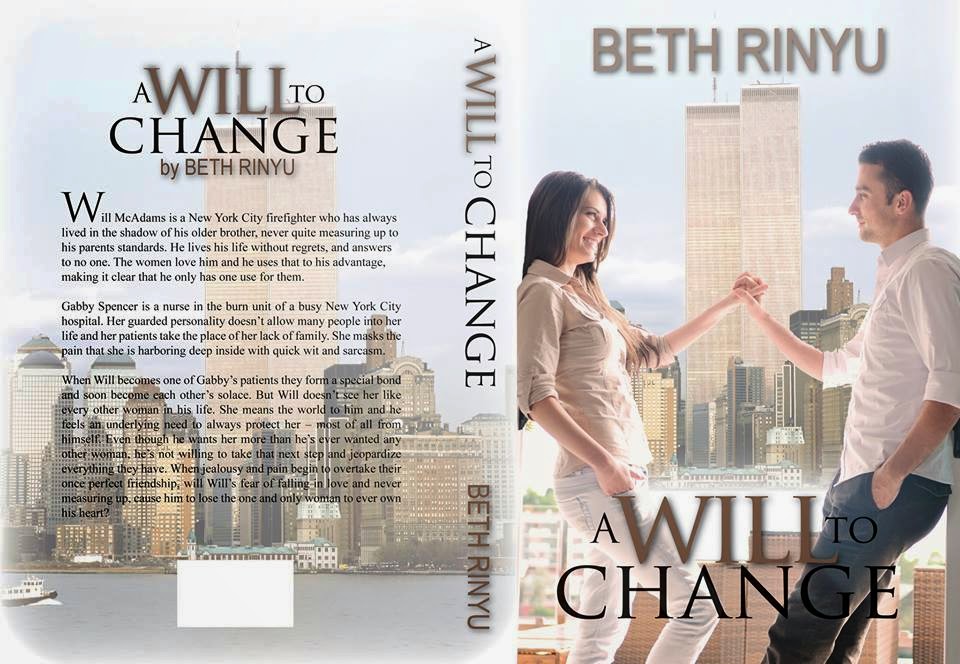 Posted by BethRinyu at 6:56 AM
Email ThisBlogThis!Share to TwitterShare to FacebookShare to Pinterest
Labels: A Will To Change, Beth Rinyu