Just wanted to let all you know about the little detour I'm taking with my writing:

I released When The Chips Are Down two weeks ago, and I plan on writing two other books in series:

Carrie's - Which I had originally planned on releasing in summer

I had a little pity party for myself when I saw my sales for When The Chips Are Down and started doubting myself about  even releasing them at all......because the demand wouldn't be there for the two other books. I got over it and realized that I made a promise before I even released When The Chips Are Down that I would follow through with Carrie & Gia's book no matter what.......just because I needed to see where there stories took me. So, if you are anxiously awaiting their stories they will be published. I'm now planning on releasing the two of them together which means it may be a little later than I had originally anticipated. I am 90% done with Carrie's book and have one chapter of Gia's book done which would put me right on target for a late summer/early fall release. Perfect.....right?

Well.....As luck would have it....A whole new book popped into my head and is taking over all of my thoughts, every time I go to sit down and write Gia's story. So, I've begun to write that one and hopefully once I get a few more chapters out, I will be able to go back to Gia (or you may be getting a whole new standalone in between). The last thing I want to do is rush or force Carrie & Gia's stories. I love these girls as if they were real, and I want them to be perfect and given my 100% attention. I hope you guys understand.....I will keep you updated. But if you are anxiously awaiting their stories.....they will be out, and I promise they will be worth the wait!
Posted by BethRinyu at 2:50 PM No comments:
Email ThisBlogThis!Share to TwitterShare to FacebookShare to Pinterest
Labels: Beth Rinyu, When The Chips Are Down

When The Chips Are Down IS LIVE!!

Here are the links:  (Please feel free to share. In fact, I'd love if you would....I think I already that, above)

Posted by BethRinyu at 4:57 AM No comments:
Email ThisBlogThis!Share to TwitterShare to FacebookShare to Pinterest
Labels: Beth Rinyu, New Release, When The Chips Are Down

Prologue ~ When The Chips Are Down

Here's a sneak peek at the Prologue for my latest novel "When The Chips Are Down". It's a romantic comedy told in in triple POV's ~ Mother and twin teenage daughters and despite their age difference they have quite a bit in common when it comes to falling in love, broken hearts, facing fears and moving on. Meet Melanie, Carrie & Gia on 3/14/15......I guarantee they will put a smile on your face.

I had the absolute best husband in the world, or so I thought. That’s why, at thirty-seven, I found myself divorced with two teenage daughters, who had a much better social life than I did, and a cheating ex-husband.

I’ve always been the type of person who liked to plan things ahead of time, so I had my plan in place. Get married, have two kids by the time I reached thirty, and be married to their dad until the day we died. Well, I got two outta three. I was married at twenty – yes, I know, dumb move! I had my two kids by the time I was twenty-one. It was the third step of the plan that didn’t work out too well. Don’t get me wrong. There were days I wanted to kill him, but I don’t think that would have qualified as step three.

I always knew that Alec – the ex, asshole, genetic contributor, jerk-off, take your pick – was a ladies’ man. I saw the way women looked at him, and the way he looked back. But I always thought of him more as a flirt than a cheater. When I was eighteen, we met at a concert and, two years later, we were married. I didn’t listen to my parents, my sister, or my friends when they told me I was too young. I was twenty, and I knew everything. Plus, I was a sucker for blue eyes. The years passed and we were somewhat happy. Yes, we would get into our knock-down, drag-out fights. Once his architectural business picked up and the money started rolling in, I thought things were getting better, or maybe I was just in denial. I didn’t want to know who he was spending all of those “late nights” at the office with, or if those business trips were really business. He was taking care of me and my girls financially, and at some point in time, I just really stopped caring if he was cheating or not. The final revelation came two years ago when I paid him a surprise visit at his office. Only it was I who had gotten the surprise when I found him and his much younger secretary – a.k.a. the new wife – in a very compromising position.

Our divorce was final a year ago. He moved a half-hour away, married his much younger girlfriend, and was now a dad again at forty. After he had left, I did the whole woe is me, scorned woman routine. I sat around in my pajamas feeling sorry for myself, cut all the pictures of us in half, found comfort in sweets, and closed myself off to the rest of the world. Then, one day, I finally realized my life wasn’t over. It was just beginning. If that asshole could still be producing offspring at forty, there was still time for me to make a success of my life. I had so many other roles besides just being Alec’s wife. So I picked myself up, dusted myself off, and proudly embraced my new life and all of my important roles. Melanie Hanson: single mom, great friend, loyal daughter, and part-owner of I Thee Wed bridal shop. Yes, my life was different now, but I was going to live it to the fullest. Even though my driver’s license may have said I was thirty-seven years old, my mind sometimes told me differently.
©Beth Rinyu 2015

Posted by BethRinyu at 3:45 AM No comments:
Email ThisBlogThis!Share to TwitterShare to FacebookShare to Pinterest
Labels: amazon, Beth Rinyu, New Release, pre-order, teaser, When The Chips Are Down

As I sit here writing this blog post, I can't help but feel a little apprehension over having less than one week to go before my newest novel releases. I'm finding that no matter how many books you release it's a feeling you can't shake. I had started this story years ago and put it on the back burner before revisiting it last summer. I revamped the story line in my head, took a chance and threw in two other Pov's, and Melanie, Carrie and Gia were born! And, just like I can't imagine my world without my kids, I couldn't imagine my book world without these characters. I knew as I was writing this that their story couldn't stop at the end of this book. Carrie and Gia still had a whole grown up life to discover and their stories needed to be told. I was dying to know where they were gong to take me.


So as I just hit 70k words in Book 2 I'm quite surprised by some of the decisions Carrie is making, but it's just like being a mom.....at some point you have to let them make their own choices and just hope they get that happily ever after. Am I worried that not enough people are going to read book 1, or not really care about what goes on any further after they do read it? I will admit, at first I was, but then I realized I'm writing Carrie and Gia's story for myself, because I wasn't ready to say goodbye to these characters. I needed to know what the future had in store for them. I know that some authors like to see how well the first book takes off, or if there is a demand for a second and third before they invest any further time into the same characters, and that is totally understandable. But, for me, these three books are personal,and Carrie and Gia deserve to have their entire story told. So, I may be wasting time and money,writing them, having them edited and having pretty covers designed, but when all is written and done, and I see all three books sitting on my end table, knowing that their stories are complete.... it will not have been in vain.

Until then....here's a little teaser from When The Chips Are Down (Book 1) releasing on March 14th. 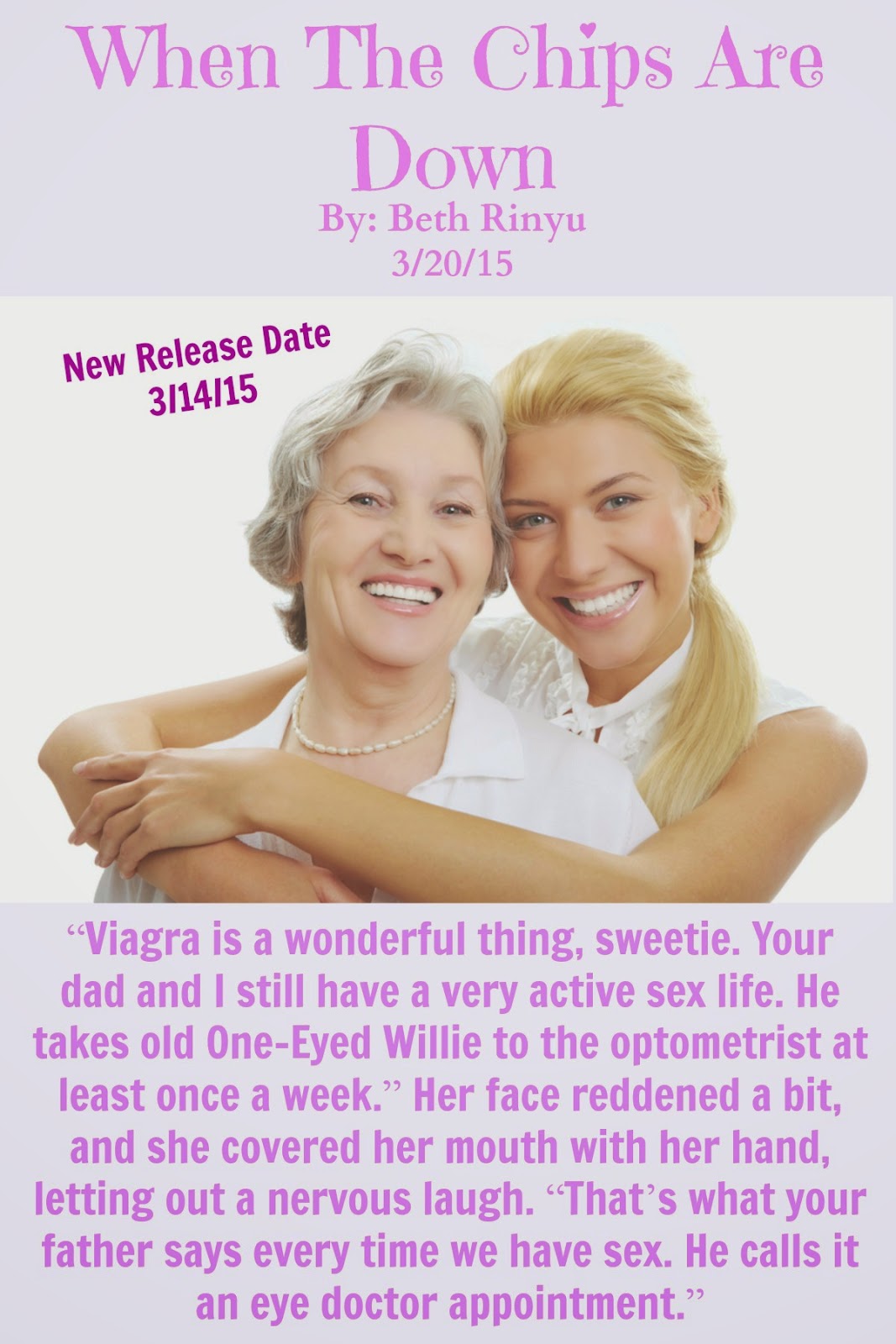 PRE ORDER ON AMAZON
Posted by BethRinyu at 10:30 AM No comments:
Email ThisBlogThis!Share to TwitterShare to FacebookShare to Pinterest
Labels: Beth Rinyu, New Release, When The Chips Are Down

When The Chips Are Down ~ Change in Release Date

I have some semi-exciting news! I have moved up the release date for When The Chips Are Down from March 20th to March 14th! For those of you who pre-ordered, it will be delivered to your kindle on the 14th.
I'm so excited about this one and cannot wait for all of you to read it!!

Posted by BethRinyu at 12:05 PM No comments:
Email ThisBlogThis!Share to TwitterShare to FacebookShare to Pinterest
Labels: Beth Rinyu, pre-order, When The Chips Are Down
Newer Posts Older Posts Home
Subscribe to: Posts (Atom)