Chapter 1 - Sneak Peek of Her Name Was Annie

The waves pummeled the shoreline like a scorned woman taking out her frustrations on an unfaithful lover. To say I knew how that ocean was feeling at that moment wouldn’t have been a lie. Ashamedly, I had let out my own frustrations a time or two in the same manner. Time had moved on, and my heart should have as well. But every now and then, I’d reserve a pity party for one with a bottle of wine on the beach that held so many memories.

The stilted house that sat behind me had been built by my parents when I was a little girl. My mother and I spent every summer in that home. Long, happy days on the beach, making sandcastles and playing in the waves, then staying up way past my bedtime. There wasn’t a care in the world back then. It was a tradition I had continued with my own daughter, hoping she had formed the same sense of solace I had growing up. Those fond memories of summers gone by were now just a flicker of happier times I would never get back.

Lifting my wineglass to my lips, I took a long, slow sip of merlot, savoring the soft, sensual texture as it slid down my throat. A squall of air shot down the beach, blowing the sand like a storm in the desert. A strand of windblown hair stuck to my face, dampened by the misty salt air, as I gazed up at the ominous sky, watching the dark clouds move at warp speed overhead. It was an eerie sight, like a scene from a movie where the world was about to end. Was it a sign or just my feelings at the moment?

There was no doubt, the anniversary of today was a hard one for me to face, but lately it seemed as if every day was getting a little harder to get through. Time was moving on whether I liked it or not, and just when I was starting to get back in this game of life, the rules were changing once again. My baby was a senior in college, and I had celebrated my forty-eighth birthday a few months ago. The dating pool was slowly drying up with most men in my age group either looking and acting like old men, married, or even worse yet—never been married, which always led to the question of “why?”

I had found out the answer to that question more than my fair share of times. Either they were egotistical playboys who still had the mindset of a twenty-year-old and preferred the company of much younger women, or they were much too set in their ways to even entertain the idea of a woman changing things up on them. I had been in one serious relationship and a few casual dates since Jack and I had divorced, not because I really wanted to, but because I felt like I needed to do it to prove I had moved on.

The only person I was fooling was myself because after eight years of being divorced, I still felt stuck in a world that wasn’t mine. I had always had my daughter, Kara, to keep me busy and keep my mind from wandering to places it didn’t want to go, but now she was away, just beginning her life, which gave me more time than I needed to delve into my head.

I picked up the bottle of wine, pouring myself another glass. Grabbing a handful of sand in my fist, I sifted it through my fingers while sifting through the years gone by like a movie in my head. Jack and I had been high school sweethearts. My parents always thought I could do better, but their opinions were no match for young love. We married shortly after we graduated from college, both fortunate enough to land jobs in our respective career choices right away. Me as an elementary school teacher, and him in law enforcement. Fast-forward twenty-five years, and I was still working at that same school I started at. Some of my very first students were now married with children of their own, while Jack had moved himself up to the upper echelons of the FBI.

Life always seemed to work out that way. It was always the woman who sacrificed everything. I never regretted one moment of not trying to advance my career to become a guidance counselor or a school administrator like I always said I was going to do. Once Kara came along, she became my world, and any thoughts of career advancement halted. She wasn’t planned, but she was the best detour my life could’ve ever taken. I had the perfect setup; my mother would watch her as a baby while I was at work. I had all the major holidays off and summers to spend with her. What more could I ask for?

The entire time I was pouring myself into motherhood, Jack was giving every ounce of himself to his career. Maybe I had made it too easy for him to do. Always being the one keeping everything perfectly balanced in our life. It was something I came to accept, knowing it went hand in hand with his job, but in the interterm of trying to be the best mother and understanding wife, I lost a piece of myself.

I saw all the red flags of a troubled marriage long before the final nail was put in the coffin. We had drifted further and further apart. Instead of facing our problems together, we went at them alone—or shall I say, I did. Jack tried to tackle it as a team, but I just pushed him away. I tried telling myself things would get better—I would get better and put our marriage back together, but when I met her, I knew that would never be a possibility any longer.

We were at a work party for Jack, I had just turned forty and was feeling insecure in that fact alone, but when I saw her, that insecurity skyrocketed to a whole new level. Super skinny, brunette, blue eyes, perfect hair, perfect teeth, and at least ten years my junior—and Jack’s. He introduced her as his colleague, Charmaine. My sixth sense kicked in immediately, and I knew she was much more than just a colleague. I had never forgotten the look on her face when he pulled me close and kissed me on my cheek in front of her. It was as if he were cheating on her with me and not vice versa.

I still to this day don’t know why he did that. Was he trying to make her jealous or was he trying to convince himself that he was still in love with me? When we got home that night, I thwarted his attempts at sex and finally confronted him about it. After a poor attempt at denying it, he came clean, swearing to me that it only happened once and it was me he loved. But it was too late, my trust had been broken along with my heart. He moved out the next day and our divorce had become final a few months after that.

I shook my head, fighting off the what-ifs. What if I had gone to see a counselor like he had begged me to do? What if I had taken him back during his many drunken midnight attempts at my doorstep? It was all in the past now. I’d always have a place in my heart for him as the father of my child, but I’d also have the memory of him being a cheater marked in my mind.

As the first drops of rain fell from the clouds, I took that as my warning to head inside. I picked up my wine bottle along with my glass and stood up, sucking in the cool, salty air one last time. Wiping the sand off my backside, I focused my attention toward the water, catching a glimpse of a man walking along the edge of the ocean. Even from a distance, I could sense he was deep in thought. I eyed him up keenly, ignoring the raindrops pelting me in the face. He tilted his head back, looking up at the sky, then turned around in my direction, seeming to be as focused on me as I was on him. I squinted my eyes, trying to get a better look, but it was useless. He had turned away, then took a few wary steps into the water.

What is he doing? It was mid-November. The water was freezing, not to mention the incessant warnings of the approaching storm and riptides.

“Hey!” I shouted, but it was useless. My voice was no match for the powerful waves or the roaring wind. My eyes darted up and down the beach to see if there was someone else with him, but it was deserted. “Hey!” I bellowed once again, dropping my wine bottle and glass in the sand, taking double strides toward the water as the man submersed himself farther and farther into the depths of Mother Nature’s wrath. “Mister!” I screamed, standing at the edge of the ocean as the cool mist from the water shrouded my face. Stepping in farther, I stopped once the water hit my knees, soaking right through my sneakers and saturating my jeans. I remained steady on my feet, battling with the ferocious undertow as I searched amongst the relentless white caps for a sign of him, but he was nowhere to be found. He had disappeared—swallowed up into the depths of the ocean as if he’d never even existed. 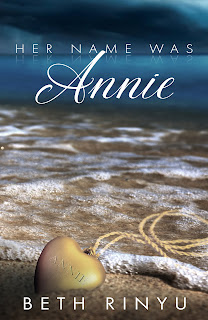