I'll Be Seeing You Is On Sale

If you haven't read I'll Be Seeing You, now is your chance to grab it for .99 cents!

My mother once said that angels come in many forms: people, animals, insects, flowers or even objects. Some stay with us for just a short time, helping us through difficult times, others stay forever, deep inside our soul, carrying us from one moment to the next. I always wanted to believe it was true, that maybe in a world where there was so much bad, there was still hope for some good. As I grew older and the innocence of childhood waned, tainting my views on life, I was finding that perhaps it was just my mother’s way of feeding my young imagination. That all changed the day I met him.You know that feeling you get deep inside your gut? The one that tells you something is dangerous, or something is meant to be. The one that sees the bad or good in a person before they even utter a single syllable to you. The one that rattles your very soul, making you question your own sanity because you know you must be completely mad for having such an intense connection to someone you’ve just met. That’s the feeling I had when I first saw him. It was so much more than his good looks, his charming personality and his caring ways. It was something unexplainable and unimaginable.The first time we met, I felt it, and I was pretty certain he did too. Familiar strangers searching for someone, or something deep inside the other. Maybe I was losing my mind or maybe I was just caught up in a daydream of how I wished my life could be. But from the first moment I had gotten caught up in his gaze, I knew I had stared into those pale-blue eyes once before…maybe not in this lifetime, but perhaps a lifetime before.

Get your copy here: 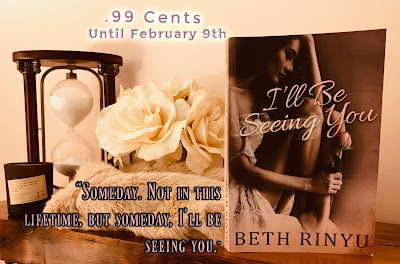 Posted by BethRinyu at 10:57 AM
Email ThisBlogThis!Share to TwitterShare to FacebookShare to Pinterest
Labels: bargain books, Beth Rinyu, I'll Be Seeing You, kindledeals, kindleunlimited